It is the eternal Divine Law of the Lord. The entire creation is held together and sustained by the All-powerful Law of God. Practice of Dharma, therefore, means recognition of this Law and abidance by it.

That which brings well-being to man is Dharma. Dharma supports 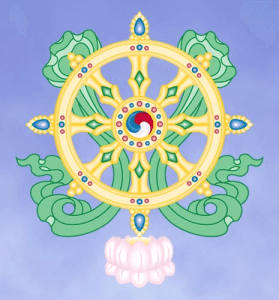 Dharmacakra, The Wheel of Dharma

this world. The people are upheld by Dharma. That which accrues preservation of beings is Dharma. Dharma leads to eternal happiness and immortality.

Dharma includes all external deeds, as well as thoughts and other mental practices which tend to elevate the character of a man. Dharma comes from the Divine and leads you to the Divine.

Dharma is generally defined as righteousness or duty. Dharma is the principle of righteousness. It is the principle of holiness. It is also the principle of unity. Bhishma says in his instructions to Yudhishthira that whatever creates conflict is Adharma, and whatever puts an end to conflict and brings about unity and harmony is Dharma. Anything that helps to unite all and develop pure divine love and universal brotherhood, is Dharma. Anything that creates discord, split and disharmony and foments hatred, is Adharma.

Dharma is the cementer and sustainer of social life. The rules of Dharma have been laid down for regulating the worldly affairs of men. Dharma brings as its consequence happiness, both in this world and in the next. Dharma is the means of preserving ones self. If you transgress it, it will kill you. If you protect it, it will protect you. It is your soul companion after death. It is the sole refuge of humanity.

Dharma means Achara or the regulation of daily life. Achara is the supreme Dharma. It is the basis of Tapas or austerity. It leads to wealth, beauty, longevity and continuity of lineage. Evil conduct and immorality will lead to ill-fame, sorrow, disease and premature death. Dharma has its root in morality the controller of Dharma is God Himself.

Dharma depends upon time, circumstances, age, degree of evolution and the community to which one belongs. The Dharma of this century is different from that of the tenth century.

There are conditions under which Dharma may change its usual course. Apad-Dharma (apad = distress) )is such a deviation from the usual practice. This is allowed only in times of extreme distress or calamity.

What is Dharma in one set of circumstances becomes Adharma in another set of circumstances. That is the reason why it is said that the secret of Dharma is extremely profound and subtle. Lord Krishna says in the Gita: “Let the scriptures be the authority in determining what ought to be done and what ought not to be done” – Gita, Ch.16- 24). The truth of Dharma lies hidden. Srutis and Smritis are many. The way of Dharma (which is) open to all is that which a great realised soul has traversed.

Dharmacakra, The Wheel of Dharma

The Dharmacakra symbol has the form of a wheel with eight or more spokes (sometimes 24 spokes representing the solar cycle). It is one of the oldest Hindu and Buddhist symbols, found in Indian art from the Vedic time and the time of king Ashoka. One version of the symbol, taken from the capital of a pillar erected by king Ashoka (hence also called “Ashoka Chakra”), has been adopted in the center of the National Flag of India. In its simplest form it is recognized globally as a symbol of, the way of life. Chakra is a Sanskrit word which also means cycle or self repeating process . The process it signifies is the cycle of time as how the world changes with time. According to Hindu belief, in each cycle the world has to pass through four phases from its starting till end of the world when the world will be recreated again. the four phases are named as Satyuga , Tretayuga , Dwaparyuga & kalyuga. (Satyuga means Golden Age , Tretayuga means Silver age , Dwaparyuga means copper age and kalyuga means iron age). Satyuga is when the human was in his happy times and then slowly and slowly the quality of human souls started declining. And finally when he reaches kalyuga, the world is recreated into new after mass destruction with wars and natural calamities.