This Homam is dedicated to Sri Dhanvanthari Moorhty. This homam is very useful for curing serious diseases.

The origins of the ancient healing science known as Ayurveda are 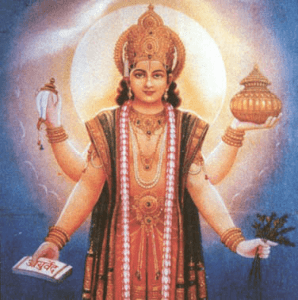 lost in cosmic antiquity. According to the ancient text Caraka-samhita, this “Science of Life and Longevity” is eternal and is revealed in each universe in each of its infinite cycles of creation and destruction. The gods and the demons sought the elixir amrta by churning the milky ocean, and Dhanvantari rose out of the waters bearing a cup filled with the elixir. The Ayurveda, a traditional system of medicine, is also attributed to him. This healing science is generally revealed by great sages or demigods. Occasionally, the Supreme Lord Himself descends as the avatara (incarnation) Dhanvantari and re-inaugurates the tradition of Ayurveda. This extremely rare appearance of God is recorded in the Vedic literature of ancient India.

Dhanvantari is depicted as Vishnu with four hands, holding medical herbs in one hand and a pot containing rejuvenating nectar called amrita in another.

The Puranas state that Dhanavantari emerged from the ‘Ocean of Milk’ and appeared with the pot of nectar during the story of the Samudra or Sagar manthan whilst the ocean was being churned using the Mandara mountain. After this event another avatar, Mohini, appears and takes the nectar back from the Asuras.

Dhanvantari is an avatar of Vishnu from the Hindu tradition. He appears in the Vedas and Puranas as the physician of the gods (devas), and the controller (god) of Ayurvedic medicine. It is common practice within Hinduism for worshippers to pray to Dhanvantari asking him for improved or good health for themselves and/or others.