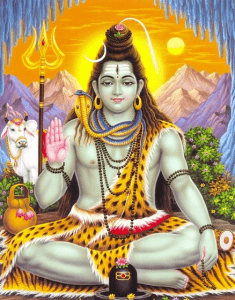 in this Veda and Sri Rudram occurs in the fourth or middle chapter. So if Krishna Yajur Veda is like a garland, Sri Rudram is like a pendant in the middle.

Sri Rudram is treated as the celebrated portion of Yajurveda with the sacred Siva Panchakshari mantra (Namasivaya) enshrined within it.

It has two portions called Namakkam and Chamakkam . Each contains eleven chapters, or Anuvakams. Most of the chapters in the first portion end with the letter Namaha or namo Namaha , while the ending letter of the second portion is “cha me”.

It is firmly believed that every deity is pleased with Rudra japam, and it is also believed that by chanting it, whatever may be the genuine prayers of the devotee, will be granted. Rudra japa is spoken of as a great purifier and it is the most effective expiation (pariharam or remedy) for even the worst sins.

In summary, Rudra japam is the best sadhana (ritual) for attaining both material and spiritual benefits from the Almighty…

Rudram means Dukham-eliminator, paapam-eliminator. The word ‘Rudram’ is derived from two words – ‘Rud’ and ‘Ra’. ‘Rud’ means dukham (sorrow) or paapam (sin, demerit). ‘Rud’ also means the cause of dukham or paapam. What is the cause of sorrow or sin? It is agnyanam (ignorance). ‘Ra’ means eliminator. Lord Siva gets the name Rudra because he removes sorrow and sin and also the cause of it, which is ignorance.

The Sri Rudram chant is an ancient Vedic hymn, and is the oldest example of a listing of various names of Lord Siva. Through the chanting of Sri Rudram, Lord Sivas various attributes and aspects are invoked and worshipped. Chanting the Rudram is considered to be of great benefit. The Rudra homa is resorted to in times of fear and concern. The powerful chant accompanying this ritual today is a collection of about 82 mesmerizing suktas taken primarily from the Yajur veda. Of these 66 to 69 suktas are addressed directly to the divinity of Rudra. These elaborate suktas are the outpourings of Parameshti Kutsa rishi The remaining ones are addressed in the original Vedas, to various deities such as Mrtyunjaya, Agni, Prajapati and Atma. In usage however all these have been gathered under the terms Shri Rudram, Shatarudriyam, Rudradhyaya and Rudra Prasna. Reciters also classify parts of the ShriRudram as namakas and chamakas based on the recurrences of the words nama and chamey.