By 400BC a Hindu Indian grammarian by the name of Panini had formally recorded rules of Sanskrit grammar. This is known as the Ashtadhyayi.

The Ashtadhyayi consists of eight chapters, each divided into four sections, or padas. It characterises the difference between the language of the sacred texts and that of common street language. 3,959 rules of Sanskrit morphology have been set out, much in the way of a mathematical function, to define the basic elements of the language including sentence structure, vowels, consonants, nouns, and verbs. Paninis work is still used in the teaching of Sanskrit today.

Classical Sanskrit, as opposed to its more archaic ancestor Vedic Sanskrit, was in its height in the centuries AD. From it came a vast body of philosophical, scientific and religious knowledge, as well as Hindu scriptures and classical literature. These include works such as the Gita and Ramayana. 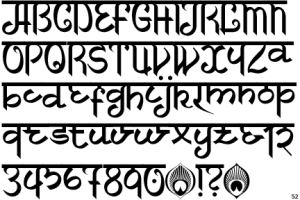 The extraordinary thing about Sanskrit is that it offers direct accessibility to anyone to that elevated plane where the two mathematics and music, brain and heart, analytical and intuitive, scientific and spiritual become one. It is the language of Classical Hinduism and the language of the Vedic and Upanishadic scriptures. Sanskrit is an ancient language like Latin and Hebrew. It means, one that is reformed/refined. The word Sanskriti, which means culture is a derivative of the same word. There are very few Sanskrit scholars in the world today and there are countless Sanskrit texts whose true meaning we may never know.

The origin of Sanskrit can be accredited to the Vedic society. Vedic Sanskrit is believed to date back to the 2nd millennium BC, when knowledge was handed down through the generations verbally.

Mystic traditions of India ascribe a wholly sacred origin to the language, describing it as the language of the gods. When westerners began to take serious interest in the language some two hundred years ago, Sir William Jones, a British judge and orientalist, noted that Sanskrit possessed vocabulary and grammatical structures very similar to many other languages, including Greek, Latin, and even English. This discovery gave rise to the study of comparative linguistics, which groups the languages of the world into families. Sanskrit, along with about half of the world’s languages, is a member of the Indo-European language family. This family has many branches and sub-divisions. Linguists place Sanskrit among the Indic languages of the Indo-Iranian branch. What common source may have given rise to this wide variety of related languages is entirely hidden by the mists of time.