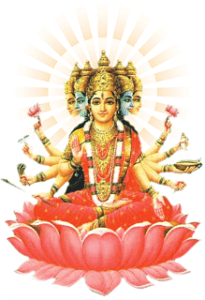 homams and this homam is generally done in favour of All the Family Members (or) City (or) Village.

When we take Mantram, Gayathri Mantram is said to be chief of all Mantrams. While saying this Mantram, we not only get the blessing of Sri Gayathri Devi but also get the blessings of Surya Devan. And this mantram is equivalent to the rays of Suryan. That kind of speciality and greatness, this Gayathri mantram has.

In Sanskrit, Gayathri means Kaayantham Thirayatha. The explanation of this is the person who is chanting this mantram will be protected by Sri Gayathri Devi.

This Mantram doesn’t belong to any specific caste (or) religion. It is a common mantram and can be chanted by anyone.

Gayatri Devi is an incarnation of Saraswati Devi, consort of Lord Brahma, symbolising the “shakti” (strength) and “dev” (quality) of Knowledge, Purity and Virtue. Saraswati Devi is held to be the patronness of the Arts, being a poet and musician, as well as skillful composer. In the form of Gayatri Devi, with the blessings of Lord Brahma, she is believed to have given the four Vedas to mankind.

For every Mantram, there will be one Rishi, who is termed to be the Kartha (person who will be main for that and will be equivalent to that mantram). Vishwamitra, who belongs to Kshatriya Kula, is referred to as the Kartha for this great Gayathri Mantra. So this Mantram is not only for Brahmanars, Vedic peoples etc but also for Kshatriyas and to all in this world.