Bhairava is the guardian deity of the abode of God shiva. So he is 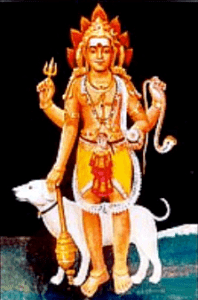 called kshetra pala. The term bhairava means “Terrific”. As the guardian of the abode of Lord, his form is very fierce, with ery many kind of weapons, naked and decorated with skull and having a smile on the face that threatens the wrong doers and protects the devotees. He has a dog as his vehicle. So he is referred as Shuna Vahanar.

bhairava is not a form of Lord shiva, but a form very closely associated and he is one of the powers assigned by the Lord. It is the custom that the keys of the temple are submitted to bhairava after the poojas are completed for the day and again taken from him the next morning before the opening. As the guardian deity he is also worshipped after any of the festivals at the temple.

bhairava would be having an abode naturally in all the Lord shiva temples. The kAsi (vArANasi) abode is much renowned abode of bhairav, as he is the protector of that whole city – the holy land of the Lord vishvanath.